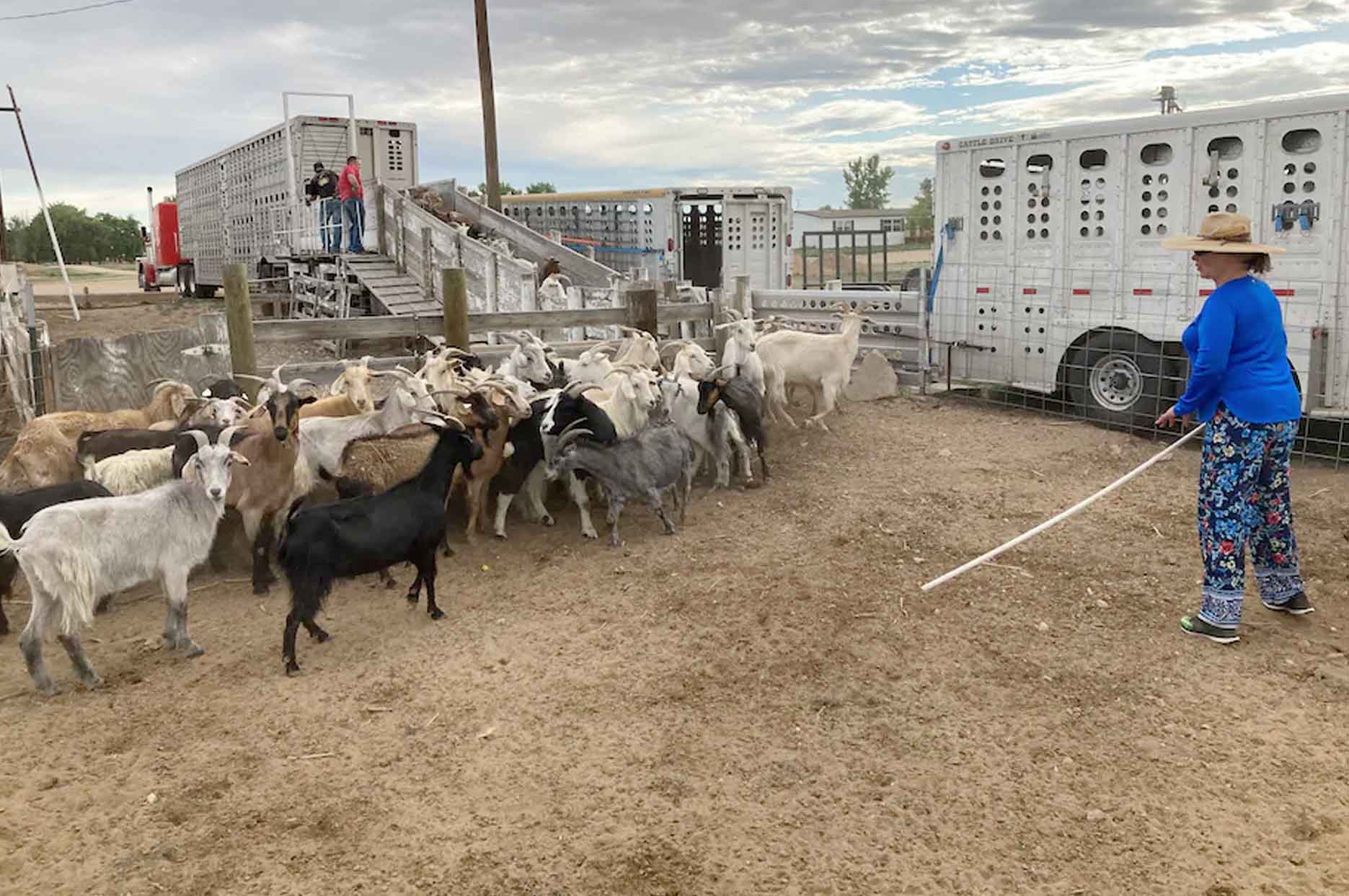 ‘They have an appetite for the kind of vegetation that makes up the fire ladder,’ said Lani Malmberg, who manages goat herds and teaches people how to put them to work

Lani Malmberg rounds up her goats on June 19 near Eaton, Colo., for a trip to another job site. They have an appetite for the kind of vegetation that makes up the fire ladder,’ said Lani Malmberg, who manages goat herds and teaches people how to put them to work.

In Colorado, Lani Malmberg and her son Donny Benz manage a herd of about 1,200 goats and have traveled to 17 states to create firebreaks, remove brush and noxious plants, and aerate the soil.

Malmberg, 64, lives in her camper on the site of each job and said she takes special joy in being alone in nature with the goats and her sheepdogs, Banjo and Layla.

“I’m a loner, and I love being out in the wide-open country,” she said. “I have never been afraid of predators. If you listen, the animals will come and tell you everything.”

Two years ago, Malmberg helped start the nonprofit Goatapelli Foundation to teach people how to work with goats in their own communities and wide-open spaces.

Using goats as a prevention tool makes sense with the rise of deadly wildfires and the shrinking of water resources, she said.

“They’re intelligent beings, making decisions about where they put their feet. They’re not going to step on a bird’s nest. And they require very little water compared to everything else — including a group of firemen.”

Goats have no problem reaching leaves on low-hanging branches.

“Horses and cattle will eat nothing but grass if given a choice, but goats will eat noxious leaves and thistles,” she said. “They have an appetite for the kind of vegetation that makes up the fire ladder.”

She anticipates that this year will be a busy season for her hungry herd.

“Because of climate change, the fires have become much worse every year,” said Malmberg. “This is our nest that we’re all living in, and the goats are living energy as they browse on the mountainside.”

“There is no machine out there that can do what a goat can do,” she said.

A 10-acre wildfire fueled by dry vegetation and strong winds was racing toward a condominium complex in West Sacramento, Calif., last month when the flames suddenly slowed and fizzled, sparing the buildings.

In the moment, it seemed like an act of divine intervention. In reality, it was the result of 400 hungry goats that had eaten the hard-to-reach underbrush surrounding a neighborhood of more than 250 homes, helping to stop the blaze.

“Goats are really hard workers — they’ll eat anything down to four inches,” said Paul Hosley, a spokesman for the city of West Sacramento, recalling the fire on May 20.

The goats hired by the city had weeks earlier munched their way through about two acres a day, causing a firebreak, or open space that’s been cleared of vegetation so flames don’t spread. West Sacramento rented 400 goats in the spring to consume weeds and tall grass at potentially flammable locations.

“It almost looks like a moonscape after they go through,” he said. “They’re good for the environment and everyone around here loves them.”

West Sacramento has used goat herds since 2014 to clear out tall weeds and low-hanging vegetation as a fire prevention measure, taking a page from other places around the world that use the environmentally friendly and adorable approach to weeding.

With another hot season of wildfires forecast this summer for the West and Southwest, more homeowners and municipalities are turning to goats to quickly clear out dry grass and leaves that can fuel fires.

“They can get into places where mowers can’t go, they eat all day without complaining and the fertilizer is free of charge,” said Hosley, noting that West Sacramento paid $150,000 this season to hire a floppy-eared herd from Western Grazers.

Residents enjoyed watching goats eat everything in sight earlier this spring. The goats made two runs to eat underbrush around the city in March and May, he said.

West Sacramento residents turn out each year to see the goats on the run through town as the curious, bleating animals head to their new browsing assignments, he said. Residents watch every year as a goat herd eats grass and weeds.

More than a dozen states, including Nevada, Oregon and New Mexico regularly use goats for fire management, but they’ve also become a popular method around the country to remove invasive plant species.

In New York City, the Riverside Park Conservancy relies on goats as natural weed eaters to control unwanted plants such as English ivy and mugwort.

For the third year, a small herd of goats will be brought in from a farm in Rhinebeck, N.Y., to dine on an endless green buffet all summer long, said John Herrold, interim president and chief executive of Riverside Park Conservancy.

The goats love the sweet taste of the park’s poison ivy, he said.

“We’re thrilled to have the goats’ help again,” said Herrold. “Everyone benefits from their presence. The goats get to enjoy the park’s weeds, the park’s natural environment is improved, and New Yorkers get to see goats in their local park.”

In Maryland, Mary Bowen has rented out her herd of 75 Browsing Green Goats to municipalities, the National Park Service and private homeowners since 2010 to clear out invasive plants without using herbicides.

“People are looking for more natural alternatives, so they’re turning to goats,” said Bowen, 57, who has a farm in Sunderland, Md., in Calvert County. “They don’t uproot anything or disturb the soil.”

Her goats are especially effective at eating tall weeds and brush that pose a fire risk, she said.

At each site, Bowen puts up a temporary electric fence to keep the goats focused on the weeds and leaves that they were hired to consume.

“Otherwise, it would be similar to herding cats,” she said.

After a long day of munching everything in sight, her goats lie down for a long rest while they chew their cud and digest the greens they’ve consumed through a process known as rumination.

“They’re sweet-natured and they’re hard workers,” she said. “I’m blessed to live my life with them.”